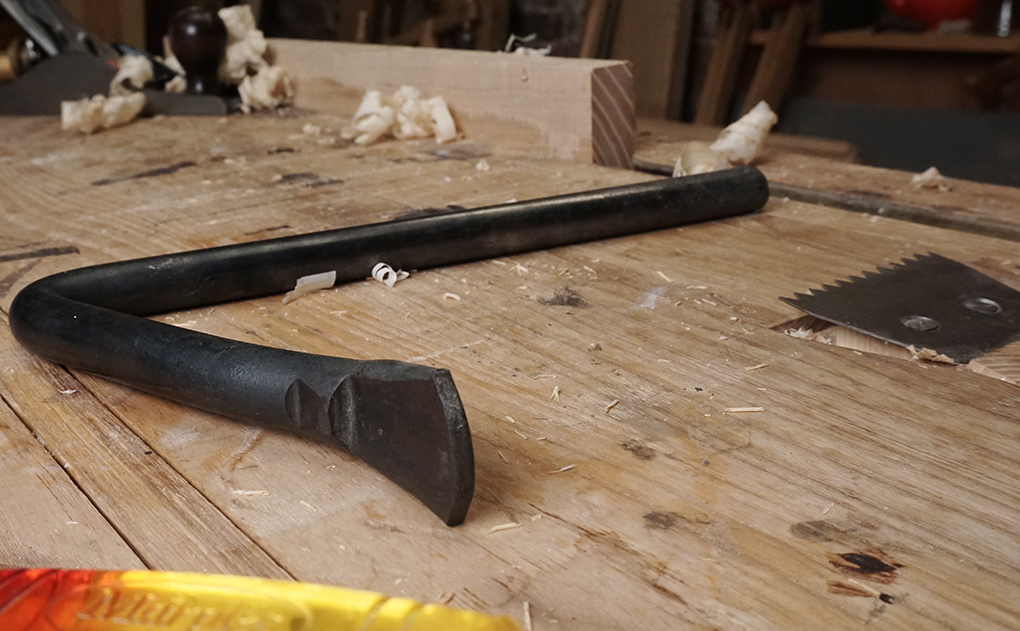 When I started building workbenches,  I pushed my way of working on to my customers.

I wasn’t aware I was doing this.
But my cave’s a small place, and I forget there’s other people out there.

Every workbench went out complete with sliding board jack, large planing stop, a pair of bench dogs.
And a holdfast.

The same questions became asked repeatedly.
What do I do with this?
Or this?

Explaining how I use a few simple gizmos to hold my work. And how versatile this is, gets people thinking.

We’re so used to wanting more, and making things fancier. So simple solutions can be refreshing.

Once refreshed by the idea of holdfasts, it’s tempting to want to over do it.

But generally we’ll only need one. Two tops.

In terms of priority, I’d sooner have one holdfast, than the most fancy of tail vice. Though a holdfast is not as important to me as my planing stop. And that could just be a nail… 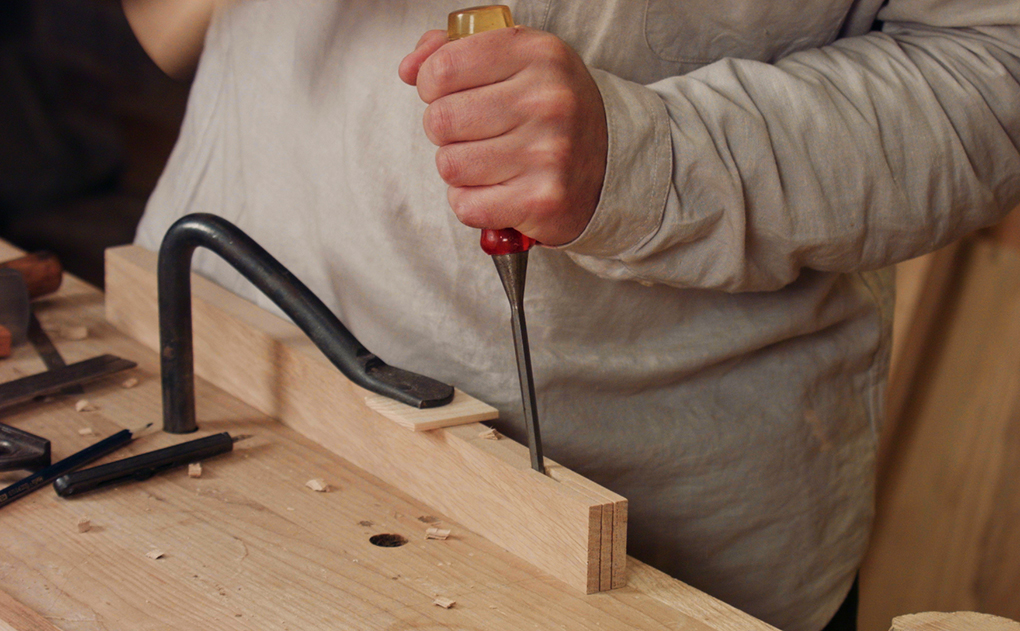 Holding work down for morticing (or in this case cutting bridle joints.) A single holdfast fixes the work in place, and gives you two free hands.

What Do Holdfasts Get Used For?

Morticing –
I love to have a holdfast about when I’m morticing.

You should never use the face vice for any chopping work (you waste energy when the wood isn’t supported underneath). So I plonk my work on the bench top.

Your work keeps itself still enough while you mortice, but then you need to prise out the waste, so you end up needing one hand to hold it down.
It’s nice to use a holdfast as an extra hand here, keeping the work held, without disruption.

Front Of The Workbench –
I also find myself keeping a holdfast in the front apron of my workbench.

I use it in the same way you would in a sliding board jack – to support the edge of wider boards when they’re held vertically in my face vice.Arguably the apron holes would have been used for pegs, but I find the holdfast more versatile.
Leave it hanging and it acts like a peg. Need an extra vice – whack it. 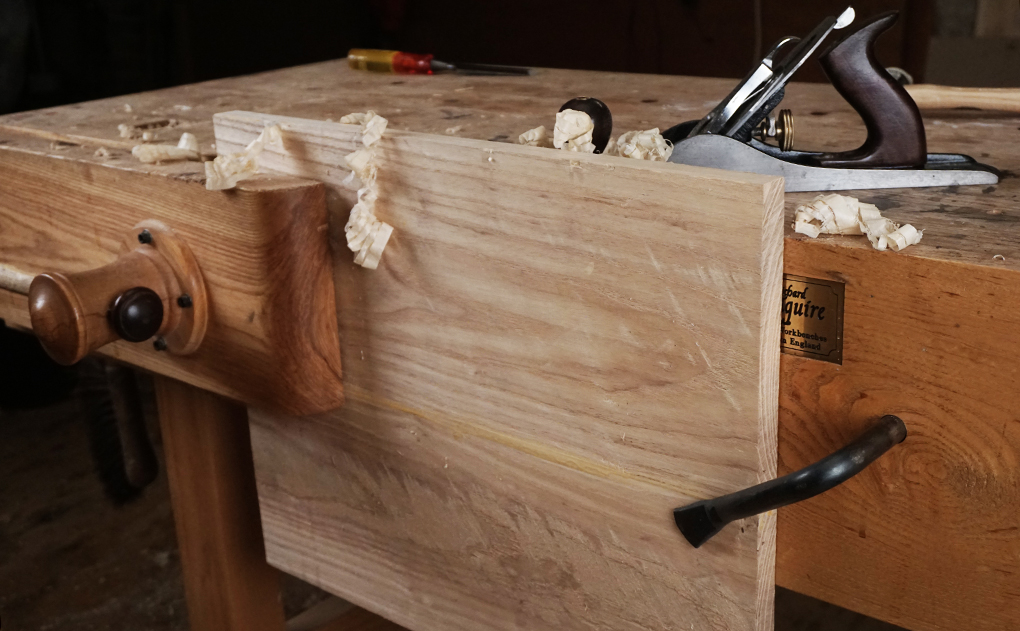 A holdfast in the front apron, or sliding board jack teams up with your face vice to steady wide boards.

Perfect For The Obscure –
Beyond this, it’s generally just obscurities that my holdfasts come in for. They’re fantastic for solving your way out of a puzzling problem. Often this is about holding something later on in to a project, when it mustn’t get marked.
So the holdfast will be well out of the way, holding some sort of batten that cradles the work without harm.

Remember, in woodwork, any holding problem can be solved with a head scratch, a holdfast and a stray nail.

In this set up I needed to hold the dovetailed carcase firmly so that the inner faces could be planed. It’s an awkward shape and I needed a method that wouldn’t risk causing any damage to it. A notched batten is great for creating a cradle, and I use it to support the back corner, the batten’s held firmly by a holdfast. At the other side I created a second cradle using a bench dog and a pinch dog (a nail would do the job).
The carcase sits in tight, so it’s held firmly without coming to any harm. This is a quick set up, that can be made to suit any size of carcase.The advantage of this set up, is that it gives me full freedom to work without having the holdfast in my way.

Types Of Holdfasts For Woodworking –

Because of the way I incorporate holdfasts in to my work; as a third hand, I prefer the light weight ones.

In fact, the bent steel bar variants are probably the best thing to come to holdfasts since they were invented. Gramercy were the first to do this, that I’m aware of. And there’s other small makers creating similar ones.
These are cost effective, but the continuing rod of steel keeps them indestructibly strong yet flexible.
There’s no risk of breakage like with a cheap cast one.

My preference for light weight is due to speed.

So for the same reason, I don’t use the modern, threaded clamp like designs. They are good, and do hold well. But take too long to set up.

If you’re building a beautiful replica bench, then you might not feel content without an equally beautiful, large forged holdfast.
There seems to be a few blacksmiths that are making lovely examples now. Buy these if you desire the looks.
They won’t have any practical advantage, and I for one would sooner not have to lift one of the heavier ones too frequently.

How Do I Get A Super Grip?

You don’t really. Getting a super grip with a holdfast is somewhat irrelevant.

It either locks and holds, or it doesn’t.

If it locks, then even a light weight holdfast will be forceful enough for most woodworker’s needs.

Ultimately you’re at the laws of physics. A holdfast gives a single point of contact, so the work underneath will be able to pivot.
If you try to solve the pivot by hitting down harder, then you simply crush the wood.

To reduce the pivot you might want to increase the friction by adding suede or similar to the bottom of the holdfast.

For most uses, like the morticing, pivoting isn’t an issue. The holdfast’s only holding against an upwards force.

Where the work will come up against sideways force though, it’s better to add a stop or batten against the work, than try to hammer down more forcefully.

To me holdfasts woodworking aren’t about force. They’re about speed, and keeping both hands free.
Similar to why I avoid a tail vice.

All of the cost effective, bent rod type holdfasts that I’ve used can withstand the weight of my benches with a single light tap.

Here I’ll be planing a deep bevel on to the edge of this board, across the length of the bench top. It’s getting towards the end of this project, so I’m wanting to keep the piece from any harm. The lovely itchy, autumnal jumper underneath is to protect the top face of the board, as it’s already been smoothed. The holdfast won’t stop the work swivelling on it’s own here, so I add a bench dog in front of the board to plane against.

Note: You can see these work holding methods in action throughout our Premium Video Series. Most of the photos in this post have been taken from the videos, and you’ll learn a lot more about work holding in both our Side Table and Spoon Rack projects.

Where Should I Put The Holes?

There’s no formula for locations.

It will depend heavily on how you use them in your work.

I general do my morticing about a foot or so back from the face vice, so I have a couple of holes around there that get used a lot.

Towards the back and rear of the bench is useful for holding battens.

If you already have round holes in your bench top for dogs, then they’re probably come in for the holdfasts as well.

If not, then I’d try starting out with just a couple of holes when you need them, then add more if you find yourself needing more.

Don’t over think it. I’ve been logging my holdfast hole usage for a little while now, and when I feel I’ve done it long enough I’ll show you my hot spots.

What Top Thickness Do I Need?

I have no difficulty using holdfasts in tops thinner than 3″.

In fact I use one all the time in the apron of my English bench, and that’s less than an inch thick.

It tends to be the thicker tops that cause a  problem. The holdfast needs to be able to twist in the hole to grip, and a thick top restricts the movement.
If you have difficulty, then you can increase the hole diameter slightly. Or, relieve the underside of the top around the hole, so the holdfast is less restricted.

Or even better, run a punch down the front and back of the holdfast’s shaft. This will help it grip.

I use them in my pine bench, no problem. But as I’ve said, I’m not laying into them.

MDF? Hollow core door from a skip hunt?
Not likely.

You need strength in the material to resist the force pushing against it.

If you really want to make this work, you’ll have to cut out a section and fill it with solid wood.

But you may just be better creating a simple solid top. (have a look here if you want a real simple one).

Holdfasts are wonderfully simple.
For anyone looking to work with more pace and less haste, your holdfasts will see plenty of use.
And for when you need to hold something down to the bench top firmly, there’s nothing quicker. A holdfast is more preferable than a clamp.

Feeling squeamish at the thought of whacking down on your work? Have a read here at my thoughts on taking a more relaxed attitude towards your bench.